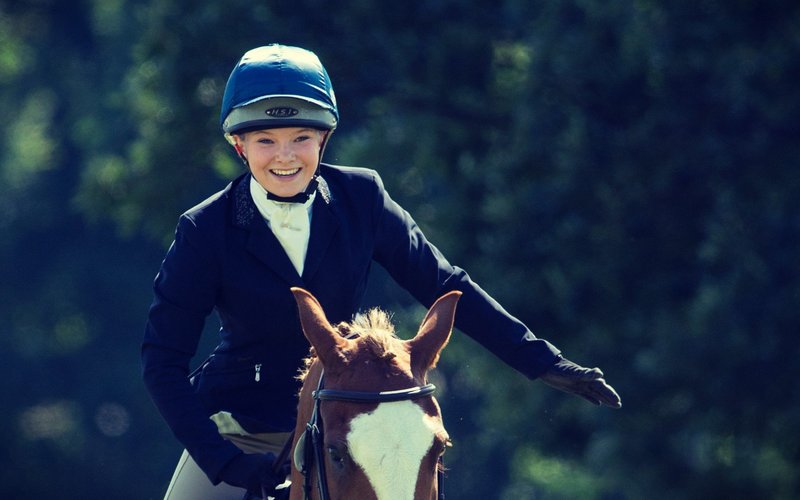 Many of us spend a lot of time focusing on the physical training of ourselves and our horses, but we’ve all suffered with doubts in our own ability, a knock to our confidence or pre-competition nerves, so what mental training are you doing?

“My horse will probably stop at this”; “This course looks too big”; “Everyone is looking at me thinking how useless I am”; “I’m scared of letting everyone down”; “There is no point carrying on if I can’t do well”.

Any rider who claims never to have had any of these thoughts, is probably lying. Sporting success relies heavily on the mastery of the mental game and with horses, who intuitively pick up on our emotions, it is perhaps even more important to stay in control. Ellie Kelly spoke to three riders who reveal how they have positively changed their mental attitude

Time out is a tonic

British Team rider Piggy French reveals that taking a year off to have a baby has helped her mental approach. It was never competition nerves that Piggy had to overcome but a loss of self-belief which resulted from an extraordinary array of unfortunate events.

“I’ve never been scared of falls and am strong under competition pressure, but London will never leave me,” she explains. Before the 2012 London Olympics, Piggy had two horses selected for the British Team but both suffered injuries weeks before the start of the Games. Her Olympic dreams had been five years in the making and in a matter of weeks, there were shattered.

“Competing for my country in front of a home crowd, meant more than anything else in the world and I had two horses capable of winning a medal,” she says. “I prepared my horses so well and I know we’ve all had horses injured, but the timing felt so cruel.”

The repercussions were lasting. “I lost sponsors and owners who were obviously thinking it would be their horse next. I felt very much on my own and lost faith in my management and system. I basically became scared to dream,” she explains. “I spent the next two years just getting by, questioning a lot of what I did. I spoke to other riders and even went to be a working pupil with a few professionals. But it reassured me because I began to realise that I wasn’t doing anything wrong, it was just bad luck. I realised that sometimes there are no answers and you can’t control things.”

In 2015, Piggy fell pregnant. “At the time I panicked - I worried about letting owners down. Suddenly I was forced to take a break and take a good look from the other side of the fence. Eventing is very demanding both physically and mentally - you are on this hamster wheel from January until October and it’s difficult to get off”.

Most professionals rarely take a day off during the season, meaning there is little time to reflect. “When I came back, other riders said they wished they had an excuse to take a break. This is a tough sport and it’s hard to get the balance. After having Max I changed a few things,” Piggy says. “I’m just as competitive but I don’t ride so many horses. I allow time for my son rather than horses being the only thing. I only surround myself with good people - staff, owners and my partner Tom is amazing. You can get very low when you have a bad day, especially when you have put everything into it. It helps to have positive, realistic people who support you.”

What has not changed, is her system or management. “I have more self-belief and am now confident that my system works. You always have bad days but it’s important not to let those get you down or look back. Preparation is key because  it helps nerves if you feel ready. You need to be focused on your goals and how you might achieve them but you have to be realistic of where you are at”.

“And enjoy life. I love competing for my country and it would be amazing if I made the Olympics. But I also enjoy training horses and I love being a mum,” she smiles.

Focus on the positives

“I used to focus too much on the negatives and feared embarrassing myself,” says 31 year old Naomi Perry, a Consultant Ecologist who competes at BE100. “I was never frightened of the cross country but it was the dressage and show jumping. I would feel panicked about everything, from being on time to having all the show jumps down. I would walk the course full of negative thoughts and with no plan or structure and be in the show jumping warm-up, turning away from fences because I thought I was on the wrong distance,” she admits.

Natalie realised each competition was becoming a huge deal and the enjoyment had gone out of it. Then she discovered a good coach in Fred Scala. “Fred taught me that I need a strategy, a goal and better time management. I used to wing it - now I focus on what I want to achieve. I want to complete a Novice this season and long term I would like to do a CCI2*,” she says. “When I am at a competition, I plan the day to the last detail. When you get nervous you can just focus on what you are meant to be doing that very minute.”

In the past Naomi worried about what other riders and spectators thought of her performance. “Now I only focus on the positives - if it does go badly, I remind myself that it happens to everyone.”

Comfortably qualifying for the 2018 BE100 Championship at Badminton after winning the Regional Final at Shelford Manor (2) in 2017, 55 year old Sarah Charnley, is all too aware of the impact of nerves after moving up to Novice level. “I have previously ridden up to Intermediate level but being an older rider, it didn’t come so easily, the nerves started to set in when I made that step up. It is mostly in the show jumping and show jumping warm up. My last horse used to freak in the warm up so it was always a stressful experience,” she says. “I have help from Ros Canter and it usually goes well at home so I know we can jump clear rounds. When we get to the event, I seem to have this mental block. I let all these negative thoughts creep in like “is she going to stop or am I going to have everything down?” I start hooking her as we are coming into fences which worries my mare.”

Sarah’s aim is to do a CCI2* before she turns 60 and was determined to improve her mental approach so sought the help of a specialist.
“Clare Burrows offers neurolinguistic programming (NLP). You close your eyes, relax and answer questions about the past. Unlike with sports psychology, you answer from your subconscious mind rather than your conscious self. Through that you discover what the real fear is,” explains Sarah.

“One session made a difference and already I feel less phased about the height of a jump. I am now riding more forward and I don’t allow the negative thoughts to creep in. That helps control my nerves.” Sarah has also been watching the Mental Performance videos on the BE Life Online and is fascinated by sports psychology: “I think professional help can benefit anyone. I didn’t have major issues. I am naturally confident but I had a few little niggles which were getting in the way of good performance.”

Sally McGinn specialises in sports psychology and has been running a series of videos with BE about mental preparation. Having evented herself and owned horses with Paul Tapner, Sally understands the sport intimately.

“Eventing is a unique sport because there are so many things that could happen out of our control which determine the result: weather, ground, horse injuries, a dressage judge having a bad day. There are often more lows than highs and you have to be tough to deal with that.”
Sally’s top tips

1. Just control the “controllables” - these include planning and preparation. Dressage is subjective, if the judge doesn’t like your horses then there is nothing you can do about it.2. Prepare to put in your best performance. This means do all your homework with training then plan your competition day as fully as possible. Allow enough time to be ready but not too much time to think and let negative thoughts creep in.

3. Feel comfortable in what you are wearing. Think of your competitive clothing and how it makes you feel. Putting on your tail coat can make you sit up and feel important and wearing your cross country colours personal to you, can make you feel excited.

4. Remember the feelings that come when we get nervous - butterflies, racing heart, quickened breathing. They are the same feelings we have when we are excited. So rather than letting yourself think it is nerves, say to yourself “I feel excited”.