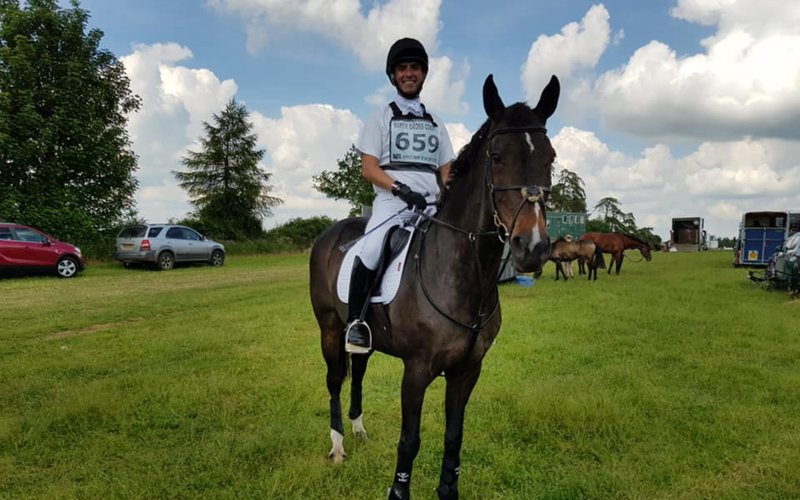 Getting started in eventing

Taking that first step into affiliated eventing is a big moment for anyone and last week Simon Blake, Chief Executive Officer of the National Union of Students, did just that. We caught up with Simon after his first BE event to see how he got on.

I grew up in Cornwall and rode throughout my childhood. I dreamed of being ‘properly’ horsey. My version of ‘properly’ horsey would have required A LOT more money. I was lucky to have two ponies and horses on loan. I was involved in North Cornwall Pony Club and, while I was at university in Cardiff, I took part in the riding club. There were about five years when I didn’t ride at all, but I started again in 2002. Since moving to London I have absolutely craved the countryside and horses.
I share my horse Renetra [‘Ren’] with my friend Victoria [Tory] Nash, who lives in Wiltshire. Tory looks after Ren most of the time and I visit at weekends. My training mostly consists of going on a treadmill in order to stay fit, but the actual riding I do at weekends – as you can imagine, birthdays and weddings get in the way, so I can’t always get there! But riding is my joy.
I had never really done eventing before and it was the same for Ren – she’s 20 and had never done cross country until last year. We did some practice and had a go at a hunter trial. She had been terrified of water and through practice we had always coaxed her through, but on the day of the hunter trial last October she just went through and absolutely loved it, so we thought we’d try eventing.
We decided to do a BE event because the cross country jumps tend to be more inviting. As a happy amateur I want a cross country course where the jumps are solid. We looked for an event that had a BE80(T) class and was within driving distance – Ascott Under Wychwood was the first one. We waited to see if we would get balloted out, but we didn’t and we were so excited.
I went along on the Saturday to walk the course and ask some questions. It turns out I didn’t have the right back protector, so it’s a good job I checked! Everyone – the volunteers and the coach who walked the show jumping course with us – was really friendly and encouraging. I expected to feel a bit amateur. Questions I could ask at 15 I felt a bit silly asking now, at the age of 44 and eventing for the first time. But everyone was kind and there was lots of camaraderie and good luck wishes.
On the Sunday, we got there with two and a half hours to spare. When we first arrived, Ren was looking all over the place, but because we had plenty of time we were able to let her take it all in.
I hadn’t done dressage on grass with Ren before. I thought it was a reasonable test, but I was very happy to get the score of 31. Show jumping is always slightly nerve-wracking – a few years ago, almost every time we went out I fell off. We had her back and saddle checked, and it turned out the saddle had pinched her. At the event, during the warm-up, I went to do the parallel and she stopped. Later I realised that actually she didn’t stop, I stopped! But I remembered the words Tom Searle, who used to teach me, always said: “Ride her like you stole her,” and I went into the ring with his words, and Tory’s: “Don’t just sit there, ride it!” in my head. We went clear in the show jumping – I was beaming.
Then we got to the cross country. All of the fences looked fine, apart from the water, but I thought by the time we got to it we’d keep momentum. We hesitated, but Ren was brave and went through. After that I’m surprised I didn’t fall off – my smile was so big! Just the memory of it makes me smile, and after the show jumping and cross country Ren honestly looked like she was beaming – she was so pleased with herself.
The key thing is to just give it a go. It might seem intimidating because it’s ‘affiliated’, but it was as friendly as being at Pony Club. Everyone seemed to want everybody else to have a good time and, at this level, enjoying it and ensuring the horses enjoy it is the priority. Because you’ve got three disciplines, it’s unlikely that all of them are going to go badly, and the woman in the lorry next to me was really positive, even though she hadn’t had the best day – nobody appeared too grumpy if they did badly. There was a really nice vibe and atmosphere. When I tweeted about doing the event, Paul Tapner and Harry Meade both liked it which was really encouraging. Eventing is a sport where people of all levels of confidence and experience can take part.
I’ve got three more BE events coming up, which I intend to enter: Calmsden, West Wilts and Bovington. Tory and I were talking excitedly about everything we would like to do this year and next, but we’ll have to see how Ren is. At 20, she’s got quite low mileage, but hopefully we’ll have another couple of years. I definitely want to do more eventing, whether on Ren or another horse, and would like to do some BE90s if possible. We’ll take it one step at a time.

If you would like to get started in eventing find lots of advice and guidance HERE.