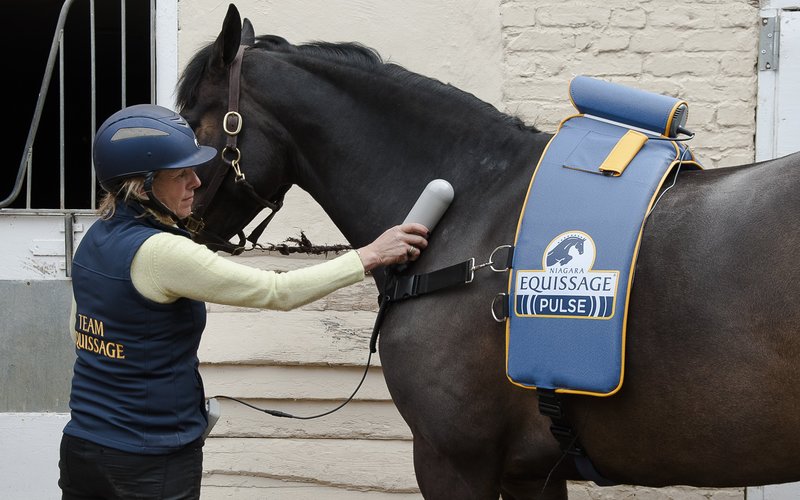 Exciting new research into the effects of cycloidal vibration therapy has shown significant benefits in horses’ muscular development and increased range of motion. Barbara Young looks into the paper from Equissage and interviews co-author Russell Mackechnie-Guire to find out more.

Horse owners have long recognised the benefits of investing in non-invasive equine therapy and treatments to help boost their horses’ performance and wellbeing, but now Niagara Healthcare, the company behind Equissage Pulse, has invested in research into the effect of cycloidal vibration on equine locomotion (a.k.a. movement or ability to move) when applied to the thoracic spine and hindquarters. The fascinating results were published in the Journal of Equine Veterinary Science in November 2018.

The aim of this study – which was carried out by an independent expert team of professionals from Centaur Biomechanics, Royal Veterinary College, Woolcroft Saddlery and Sparsholt University – was to establish the immediate effect a roller containing a unit providing cycloidal vibration therapy positioned on the thoracic spine had on locomotion, muscular development and pelvic symmetry in a group of non-lame horses.

A sample of 30 horses, all aged from six to 12 years, were used in the trial and prior to the trial all underwent a veterinary assessment to check for soundness. The horses were then randomly assigned into two groups: a treatment group, which received a 20-minute cycloidal vibration therapy, and a placebo group that did not receive any vibration therapy. Both groups were equipped with eight inertial sensors and assessed in trot.
The study, which took nearly two years to complete, showed that the group which received vibration therapy by means of positioning a roller on the horse’s back, together with a hand held unit housing a unit delivering cycloidal vibration, had an immediate effect on the horse by altering thoracic range of motion, thoracolumbar musculature and pelvic symmetry, thus increasing range of motion. However, in the placebo group, which followed the same protocol excluding receiving any vibration therapy, no changes in any measured parameters were observed.
The study’s co-author Russell Guire of Centaur Biomechanics points out that although there have been many claims made about the use and effectiveness of therapy products over the years, there remains a lack of evidence to support them.

“Horse owners seek solutions to help improve their horses’ performance and provide some level of protection against injury,” says Russell.

“Equissage came to us looking for an independent study to be carried out to investigate the effect that their product has on whole horse locomotion,” he explains.

“We’re interested in carrying out research on anything which is related to improving the welfare, soundness and performance of the ridden horse. We were impressed with Equissage and their passion to gain objective evidence to support or disprove their claims.

“Excitingly, horse owners, veterinarians, therapists and riders are looking for objective evidence to support the many claims made in the industry. This is a great thing as it is raising the bar of products available to horse owners.

“Proactive companies are keen to commission projects in an attempt to gain independent evidence on their products use and benefits. This can only be a good thing for the industry, providing evidence-based information on various products.”

The study’s research team used the Equissage Pulse roller on the horses’ backs positioned in the region of T10-T13 and the results showed that vibration therapy increased whole horse locomotion, as well as increasing the horses’ muscle dimensions at T13.

“We tested the horses immediately after the treatment,” explains Russell. “This study only looked at the immediate changes. However, it’s likely that these benefits would be long-term, although our study didn’t investigate this.”

This was a controlled blinded study using state-of-the-art measuring systems to objectively analyse the horse locomotion pre- and post-treatment. The research team noted the changes and improvements in range of motion which were seen in the treatment group, whereas in the placebo group no changes were found.

“From our previous work we have shown that this area [T10-T13] is associated with improved gait features when pressures created from saddles are reduced,” explains Russell. “It’s an area that has considerable muscular attachment aiding locomotion and stabilisation of the back.

“Over the past 10 years we have been researching the horse’s thoracolumbar region [back] in respect of the interaction of the horse, saddle and rider. This study has shown that there is increased range of motion of T13 and that the epaxial musculature increased in its dimension as a result of vibration therapy – this is super cool.”

Research has shown that Equissage Pulse delivers not only enhanced performance, but successful rehabilitation for a range of injuries and is proven for use as daily maintenance in warming up and cooling down pre- and post-workout as it improves local blood circulation, lymphatic drainage, relaxation and joint mobility.

The Equissage unit delivers powerful cycloidal (three-way) vibrations to the whole body, and is scientifically proven to help in rehabilitation from a multitude of injuries or persistent conditions.

“The demands on the ridden horse are ever increasing and the risk of injury to the horse is ever apparent,” says Russell, who bought the Equissage system himself after analysing all of the data and since then his three horses have worn the cycloidal vibration roller every day pre- and post-exercise.

“There are many products available, however a paucity of evidence on their effectiveness and benefits. I would strongly advise all horse owners who are looking to invest in a system to do their own research and ask for evidence to support any claims being made in any marketing campaigns. I believe owners are becoming more curious as to how things work, and why, and are looking to see objective evidence.”

Russell points out that the therapy world is receiving more scientific attention which he says ‘is exciting’.

“We need more companies to follow in the footsteps of Equissage to provide objective evidence to support and further develop their products in order to offer the best and most beneficial system to the horse.”