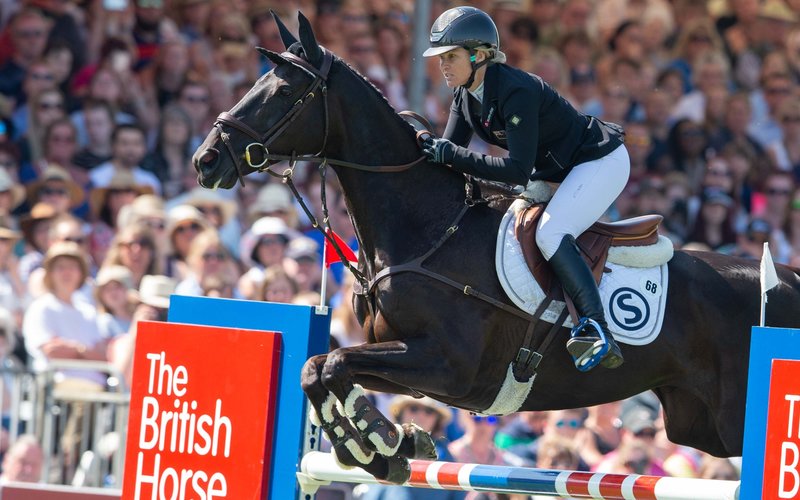 In 2015 BE Life interviewed the British breeder of Classic Moet, Elaine Hepworth, and, following her incredible win at the 2018 Mitsubishi Motors Badminton Horse Trials, we revisit the interview to find out about the lady who bred the fastest event horse in the world.

Elaine Hepworth bred Classic Moet, the leading competing mare in the BE points rankings for 2015. Here, she talks to Alice Cooke about the secrets to her success

Classic Moet is the sort of horse that every breeder dreams of producing, but Elaine Hepworth almost didn’t.

“I only decided to breed from her dam [Gamston Bubbles] because my local hunt wouldn’t let me be joint master!” laughs Elaine Hepworth. But, she concedes, “Gamston Bubbles would have been completely wasted on hunting – even though she was so brave, she’d jump anything”. By the former HIS sire Bohemond, Gamston Bubbles was advanced by the age of six and campaigned up to three star level before turning her hoof to breeding.

Classic Moet was produced to two star level by former British team member Karen Dixon, then acquired for present owner Trisha Rickards. Jonelle took the ride almost three years ago. In 2013 they were third at Ballindenisk CCI3* and in 2014 at Luhmühlen, their first four star start, they finished 12th. The pair were then selected to represent New Zealand at the Caen World Equestrian Games in 2014, where they finished in fourth place with the fastest cross country round of the competition.

Last season (2015) she finished in the top 20 at the Mitsubishi Motors Badminton Horse Trials, and then took the runner-up spot in the CIC3* British Open Championships at Gatcombe. She was one of just two horses to make the optimum cross country time at the 2015 Land Rover Burghley Horse Trials to finish fifth, earning Elaine the British Horse Foundation Land Rover Burghley Horse Trials 2015 breeder’s prize for the highest placed British-bred horse.

How on earth did Elaine breed such a brilliant mare? How can we do it too? Luckily for us, she has the answers…

“We’re doing a pretty good job at the moment,” says Elaine of the current standard of British stallions. “But a lot of them are expensive to use.” The price, she says, is often dictated by the number of successful progeny, but also by trends, which she is reluctant to follow. Elaine follows her instinct instead: “I don’t pick from the top crop of stallions because I simply can’t afford to – but that doesn’t mean that I settle for just anything. I pick a stallion based on the mare that I am using – he has to improve her. And he must have a good temperament – that’s the most important thing of all.

I personally go and visit the stallions I use if at all possible.”

“Treat them like a normal horse and don’t mollycoddle them,” Elaine stresses when talking about the care of broodmares. “Mine live out in the field year-round, without rugs if I can possibly avoid it, and I don’t feed them unless there’s a specific need to.
I just let them be horses.”

When selecting a mare to use, Elaine says that, as with the stallions, “temperament is everything. Beyond that she must be proven at whatever it is you want to do. Why would you breed from a mare that hasn’t been there and done it? That makes no sense to me.”

“I started off Classic Moet. We hunted for two seasons with the Blankney and I rode her in BE100 events before I sold her to Karen Dixon. It is wonderful that she has ended up with a rider as experienced as Jonelle.”

Classic Moet’s dam, Gamston Bubbles, was one-quarter Shire: “Three star was her limit; we were going flat out and she just wouldn’t have had the speed for Badminton.

It is interesting as it means that Classic Moet is seven-eighths Thoroughbred and one-eighth Shire – and the Shire is, I think, what gives her the edge. She has always had a temperament to die for and was dead straightforward to produce.”

But Classic Moet isn’t always easy, Elaine concedes. “I really struggled with her on the flat – when she gets really uptight she blows her nose repeatedly.”

ELAINE ON… ONES TO WATCH

“I bred three full brothers and sisters from Gamston Bubbles. There is Classic Moet, Classic Piper and a hunter."

Classic Piper (2004) was produced by Karen Dixon and is now competing with Under-21 rider Elizabeth Hayden at three star level. “Karen [Dixon] wanted me to keep Piper over Moet, as she thought he was the better horse of the two, but I have a real soft spot for a mare!”

ELAINE ON… BRINGING ON YOUNGSTERS

At the moment Elaine has two youngsters of her own, the oldest of which is five (by Co-Pilot) and out hunting this winter.
And what’s her secret? “Treat them all like individuals, no two horses are the same.

I try to break my own youngsters in as late three year olds then keep them ticking over through the winter, before bringing them out Eventing as four year olds – that way they get a headstart. But you have to play it by ear, that’s the main thing really.”