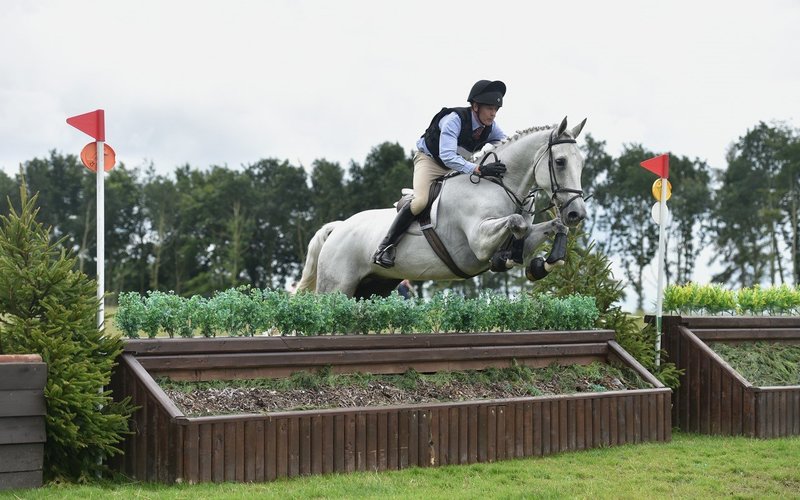 William Cursham: "It felt like an absolute joy to be out eventing again"

Going through the finish of the BE90 cross country at Frickley Park felt amazing. This was my first ever BE event with my horse, Harold, and only our second ever cross country round together. Yes, we had a ‘hiccup’ at a rather scary looking blue and white corner, but Harold had never seen a corner in his life, let alone such a brightly coloured one and frankly I was delighted that we got over it second time.

Like many competitors, our preparation was far from ideal. Before we got the all clear from the government to resume sport, I had been working him only lightly. Suddenly, at the end of June, it was all systems go and we had to be ready in the space of a few short weeks. During that crucial time Harold was off games for 10 days after escaping from his field and pouring 2000 litres of diesel over himself (a long story!). Luckily Jon Barlow, with whom I keep Harold at livery, did his usual magic and managed to get him fit.

The sum of our training for our first ever BE Event was therefore a show jumping lesson with my fellow Board Member Nigel Taylor and a quick buzz round some cross country. .

So to get round Frickley with a 35 dressage, clear show jumping and one run-out cross country felt to me like a massive achievement, and I was chuffed to bits with Harold, who must be wondering why I am making him jump strange things in the middle of fields rather than sensible things in hedgelines!

But my sense of achievement went well beyond getting round our first BE event. It felt like an absolute joy to be out eventing again after months of lockdown. Even more than that, I felt a huge amount of pride in being able to assist, in my own small way, the team at BE achieve what a few weeks before had seemed impossible; the resumption of sport.

I have been a BE Non-Executive Director (and member of the BE Board) since January and it is fair to say that I couldn’t have experienced a more difficult start to my term! First, the challenges with EARS that we all faced in the early part of the year. Then, of course, came the dreaded COVID19.

A friend of mine who events to Intermediate and is a very successful businesswoman said to me “Well you won’t have anything to do now!” when I talked to her about being a Board Director during lockdown. Many people may think the same, and understandably so, but in fact the opposite is true. In normal times, Non-Executive Directors are very much in the background, overseeing the running of the organisation and supporting the executive team. Typically, we would have Board Meetings every other month, with a handful of phone calls in between depending on what issues arise. When an organisation hits crisis, however, it is all hands on deck and suddenly the Board was meeting twice a week (virtually, of course), with each meeting lasting at least two hours. I also have a busy full time job as a lawyer and I still don’t know how I fitted it all in, but then again that was nothing to what our Chair, Fiona O’Hara put in; she must be superhuman.

There was so much to deal with. With all BE events suddenly being cancelled our revenue- which is mainly derived from Memberships and horse tickets- dried up overnight. ‘Cash is king’ but suddenly it stopped coming in. The Board and the executive team had to make some radical decisions in terms of furloughing staff and, sadly, redundancies. This meant that the HQ staff was cut back to a skeleton and this brought its own problems. We had hoped to use lockdown to work on the EARS system but we could not do what we wanted because we did not have the staff.

And, of course, we had the abandonment insurance. When we made the decision to cancel all sport forthwith, six events had passed ballot. If those events had been cancelled due to wet ground, the insurers would have paid up- as they have done for the last ten or so years. But they refused to pay out this time, arguing that the policy did not cover COVID19. This meant that competitors did not get their entry fees back and naturally they looked to BE for recompense. BE, however, did not have the entry fees because they had already paid them over to the organisers as we are obliged to do under the affiliation agreements. And the organisers had already spent the entry fee money to pay the costs that they had already incurred for the event. It was a Catch-22 situation and it felt particularly galling that BE got the blame for it. As a lawyer, I was heavily involved in the dispute, spending many hours examining the insurer’s arguments and helping formulate BE’s. We are delighted that our hard work has paid off and resulted in the claim being settled in full. We thank our members for their patience during this challenging time.

Those months of lockdown were dark but it was comforting to be a part of a Board with a wealth of knowledge and a broad range of relevant skills; the vast competition experience of Nigel Taylor, Les Smith and Gary Parsonage (I remember watching Gary riding round the Atlanta Olympics!); the business acumen of Fiona O’Hara and Jane Peters; Chris Tattersall’s years of experience in finance and Louise Jack’s expertise in IT. My legal knowledge came in far more useful than I ever thought and I can now call myself a grassroots rider too!

It will always be a source of great pride to me, and I’m sure the whole Board, how the BE team managed to get sport going in such a short space of time. I think it is close to a miracle that the BE HQ team, in conjunction with organisers and officials, got the whole sport off the ground again in such a short time; this when several staff had barely returned from furlough and no-one had access to the office. A special mention must also go to Miranda Collett, who has assisted hugely in allowing her Eventing Scores system to be used to support EARS.

After so long ‘in the trenches’, starting sport again was exhilarating.  On the first weekend back, I attended Aske as a volunteer, pole-picking in the show jumping. My fellow pole-pickers, Becky and Katrina, and course-designer Tracey Barraclough, made it great fun, but above and beyond that it was just great to see people out and enjoying their sport.

It was all this that made my first competition at Frickley so sweet. Yet like everyone on the Board, I am acutely aware of the many challenges that lie ahead. As dire as lockdown has been it has showed us that BE must change. HQ staff has been cut, and expenditure has been cut by £1.5 million as compared to 2019. More savings will be made. It is also a top priority to get the IT system into proper working order, particularly EARS.

It won’t just be cuts, either. During lockdown the British Eventing Advisory Group (BEAG) was set up, a working group consisting of Captain Mark Phillips, Mike-Etherington Smith, Stuart Buntine and Helen West, whose objective is to look at ways to improve and grow our sport. The BEAG has already made recommendations and once these have been discussed and agreed with the various stakeholders, they will translate into real changes. Sport in 2021 may well offer exciting new possibilities to Members. Watch this space!