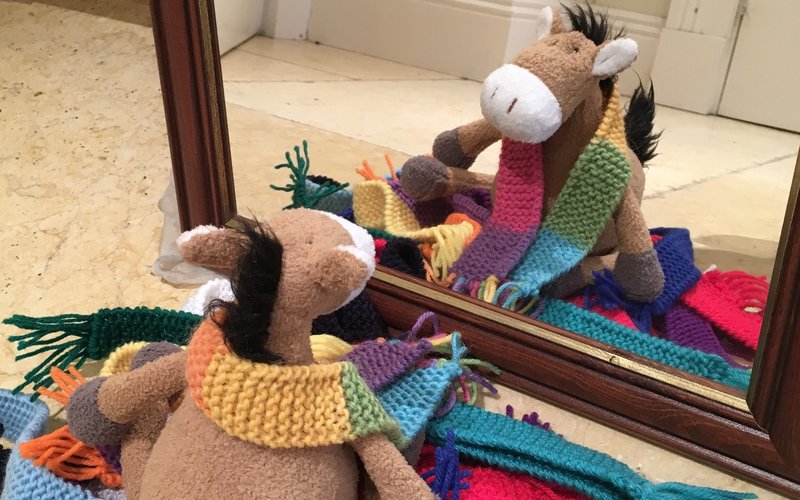 Approximately 1,200 riders have so far signed up for The Wobbleberry Challenge and participants tell tales of adversity and fear, but also laughter, camaraderie and human spirit. We meet three participants and hear their poignant stories.

Sixty-seven year old Nicky McAllister has suffered her own grief after she lost her daughter in a snowboarding accident in 2012.

“I was terribly moved by Hannah’s story. I felt for her parents the way I did when I lost my daughter Mimi,” Nicky explains. “My daughter evented and we used to ride together – we had such fun. While I was doing the challenge for Hannah and her parents, a part of me was also doing it for Mimi. By complete coincidence the event I chose to enter was Little Downham, which was the last event my daughter competed at before she died.”

Nicky had previously evented, but her last experience had been a traumatic one: “It was 17 years ago. I had a crashing fall in a BE100 and ended up in hospital after being knocked out, breaking my shoulder, collar bone and three ribs. After that I decided never to do any cross country again,” she says. “Then I read about the challenge. When I saw the event was at Little Downham, I wanted to give it a go.”

Nicky started out her challenge with an ex-racehorse, but after months of lessons it became clear that he was not going to be suitable. With the event fast approaching, Nicky took drastic measures: “I stole my husband’s hunter. I actually only ended up jumping him twice before the competition and never took him cross country schooling.”

The day brought Nicky an overwhelming sense of triumph, especially given the lack of preparation and a challenging mount.

“Harley is a great hunter, but nappy on his own. We had a stop in the show jumping because he napped at the gate and then two refusals on the cross country because of nappiness. It was hard work – he’s 16.3hh and I am five foot two.”

Inevitably there were doubts throughout the journey. “My confidence had been so knocked by my previous fall, I regularly thought I couldn’t do it. Even on the day, I walked the course thinking how big it was,” reveals Nicky.

“I had a really good battalion of helpers with me and I just kept thinking about why and who I was doing it for, which helped me overcome the fear.”

Nicky achieved her fund-raising target of £500 and says it has rekindled her enthusiasm for the sport. “I even did a pairs hunter trial with a friend recently,” she smiles. “During the build-up to the challenge, I said I would never do it again, but on reflection I think I would.”

Sarah Goldsworthy was diagnosed with Crohn’s disease 15 years ago. It is a debilitating and long-term condition that affects the lining of the digestive system, causing acute pain and extreme fatigue.

“In the last few years I have had huge flare ups, making regular visits to the hospital,” says Sarah. “I missed six months of work and had stopped riding. Hannah was writing her blog during the time I was ill and it struck a chord. When she passed away and The Wobbleberry Challenge popped up, I felt it was something I had to do. I was in the middle of a serious flare up, still unable to work or do anything much, so it probably wasn’t the most sensible idea at the time. But Hannah’s story, her bravery and inspiring outlook bowled me over. I thought: ‘If she could achieve so much in the face of her difficulties then my problems pale into insignificance.’”

It wasn’t just Sarah’s physical condition that presented a challenge. “My lovely horse Minstral was still in the field after a year recovering from a serious tendon injury and facing an uncertain future. The horse I was riding wasn’t up to the job, so just four months before the date I’d chosen for my challenge, in an act of desperation we grabbed Minstral in from the field, scanned his leg and made a plan.”

Sarah had picked West Wilts as her event for the challenge: “It wasn’t the smoothest build-up. After much nail biting plus an unhealthy number of times checking he was sound we arrived at West Wilts having had very little time for actual competition practice.”

Sarah was joined by her husband and three friends, but in terms of her physical state, she was not having a good day. “Walking the cross country was a nightmare,” she says. “Crohn’s and stress do not make for a happy combination and fatigue had kicked in with a vengeance. If I could barely get round on my own two feet how on earth would I make it round on horseback? Luckily, I had the best support team who did everything while I collapsed into the front seat, frantically sucking energy sweets. Dressage was a disaster – Min was so excited to see the cross country jumps in the distance as we entered at A that any pretence of listening to me disappeared. A much-needed break before the show jumping made me feel a bit more human and, although we didn’t go clear, we thoroughly enjoyed jumping the course.”
With just 30 minutes before Sarah’s cross country start, the dreaded fatigue was creeping up again. “I was worried about making it round the course. The BE coach was aghast when I said I wasn’t going to jump the practice jump as I was saving my energy. Then suddenly we were off and my fantastic little horse pricked his ears, knew exactly what his job was and brought us home clear. We got through the finish and I was just so elated. Even my husband said he almost shed a tear and he is a tough farmer!” she laughs. “Afterwards we had a glass of Prosecco on the ramp to celebrate. Going to Blenheim to collect the rosette was special too.”
Sarah raised £600 for Hannah’s Willberry Wonder Pony. “I had amazing support throughout the challenge and it was a real team effort to get us through. Hannah faced an enormous struggle and on days where I was so exhausted and didn’t feel like doing anything, I felt a mixture of motivation and responsibility to do it for her. What’s more, Minstral is still sound, my Crohn’s is stable and we’re looking forward to next season.”

Earlier this year 54 year old Clare Tredrea would quake with terror at the prospect of jumping a cross pole.


Not only has she overcome her fear by completing The Wobbleberry Challenge, but she has raised a staggering £6,000 in doing so.

A qualified nurse and owner of a care centre looking after people with brain and spinal injuries, Clare chose Bovington to do her challenge. “I started riding after a 25-year break, but lost my confidence with my previous horse, so had stopped jumping completely. Then I found Flynn, who looks after me, and The Wobbleberry Challenge offered me my target,” Clare explains. “Hannah was so brave throughout and you felt you were carried along this wave of emotion with her. It was sad but she was so motivational. Doing this for her has helped me combat my fear. I started in January 2017 and tried to do something every weekend to keep the momentum, but there were a lot of tears and anxiety along the way.”

Clare has done a number of things to raise money. She opened a pop-up restaurant and cooked for 45 people in her house, as well as offering horsey bed and breakfast and donating all the proceeds. She sells Christmas cards and has knitted hundreds of scarves for Willberry ponies.

“People have been so generous with their donations. The standout was my friend’s 10 year old daughter Maisie Miller, who gave all her birthday money – more than £300 – to the cause,” she explains. Clare enjoyed the challenge so much that she has been inspired to continue in 2018. “I’m even thinking of doing the BE90 at Bovington,” she smiles.
Founder Sally Barr has been overwhelmed by support: “We’ve just opened registrations for 2018 and already had 500 people sign up. I started it because I was so upset about the tragic loss of such a talented young girl, it made me feel I should stop making excuses and make the most of the opportunities I was lucky enough to still have. As soon as we started sharing the idea on social media, it was clear many people felt the same way.”

The tragic story of young event rider Hannah Francis touched the eventing community most deeply. Her stoicism and positivity while battling terminal cancer was both heart-rending and inspirational. The charity she founded, Hannah’s Willberry Wonder Pony, has raised more than £800,000 in a huge variety of ways.

Perhaps one of the most commendable fund-raising efforts comes from the participants of The Wobbleberry Challenge. This group of riders have not only given £243,000 to the Willberry cause, but in many cases have overcome fear, age, illness and their own bereavement to take part. The Wobbleberry Challenge was devised by Sally Barr and Sam Elms and is open to riders over 25 who would like to step up to British Eventing with the challenge to complete a BE80(T) event and support the charity at the same time. According to Sally and Sam: “The core group is ‘middle-aged wimpy riders’ – our oldest to complete is 76!”
For more, visit www.wobbleberries.com